Riccardo Muti founds the Italian Opera Academy with a look to the past and prospects for the future.
Muti’s important project is addressed not only to young musicians from all over the world, but also to an audience of all ages that can attend all his rehearsing sessions in the theatre: rehearsals become real and actual concert-lessons.

For over forty years, Riccardo Muti has been insisting on the importance of classical music in each individual’s development and human growth. During the rehearsal sessions, Muti teaches music and passes on his method of approach speaking in a simple and direct language. This way, Maestro inspires the general public to feel consciously involved and ready for listening.

Using his own words:
“In the Italian schools, Music is practically absent, if not worse. Music should be mandatory, like the Italian language.
I’m a musician because my father believed that private teaching of music, compensating for the defects of the school, was fundamental for the education of young people.
At the age of seven, they handed me a small, two-quarter violin and not to make me become a musician. Instead of a train toy or a water gun, I received an instrument and now I’m here, that’s where this life of mine was born.
Even as a teenager, when I was studying not to enter the profession but to have a complementary education, I felt that teaching music is unavoidable for the education of young people, of a European citizen or a citizen of the world.
Populations that are from our culture are understanding this. We are less and less.
Instead, a Country with such an important musical past like ours, can’t overlook the knowledge of this history, of its history.
Already when I was a high school student (so, going back in time), together with other schoolmates who shared the same need to learn as I felt, we perceived as an impairment of general knowledge that a student could end his studies at the classical lyceum knowing who Mantegna and Il Sassetta were, but knowing absolutely nothing about Pergolesi, Cimarosa, Verdi, Puccini… not to mention Monteverdi.
Having a rough idea of art history and removing music was already a mistake back then. What is the point of listening to Beethoven knowing absolutely nothing about him?
Having some sort of historical and general knowledge of the subject means listening and enjoying it in a different way, more vivid and profound. Whereas listening without any awareness, just like hearing, is something else.”

The main aims of this project are:
– Giving young musicians the opportunity to work with Riccardo Muti and learn lessons coming directly from Verdi’s world through Toscanini and great teachers like Antonino Votto (Riccardo Muti’s Conducting Professor).
– Educating the audience to listening, showing them how an opera is built and prepared during the whole journey from the first rehearsal at the piano and the stage orchestra rehearsals to the final performance, through the deep study of the score from the musical and dramatic point of view.
– Protecting, therefore spreading, the beauty and profoundness of the Italian Opera, according to methods and criteria that are disappearing.

Therefore, Riccardo Muti feels the moral and ethical duty to convey his experience to new generations of musicians (and not only), to help them deal with the extraordinary Italian opera.

The Riccardo Muti Italian Opera Academy project took place also in Seoul in 2016 and has been organised in Tokyo since 2019, thanks to a multi-year collaboration with one of the most important Japanese musical organization: the Spring Festival Discover more.

Attend the rehearsals with Riccardo Muti
(in the audience) 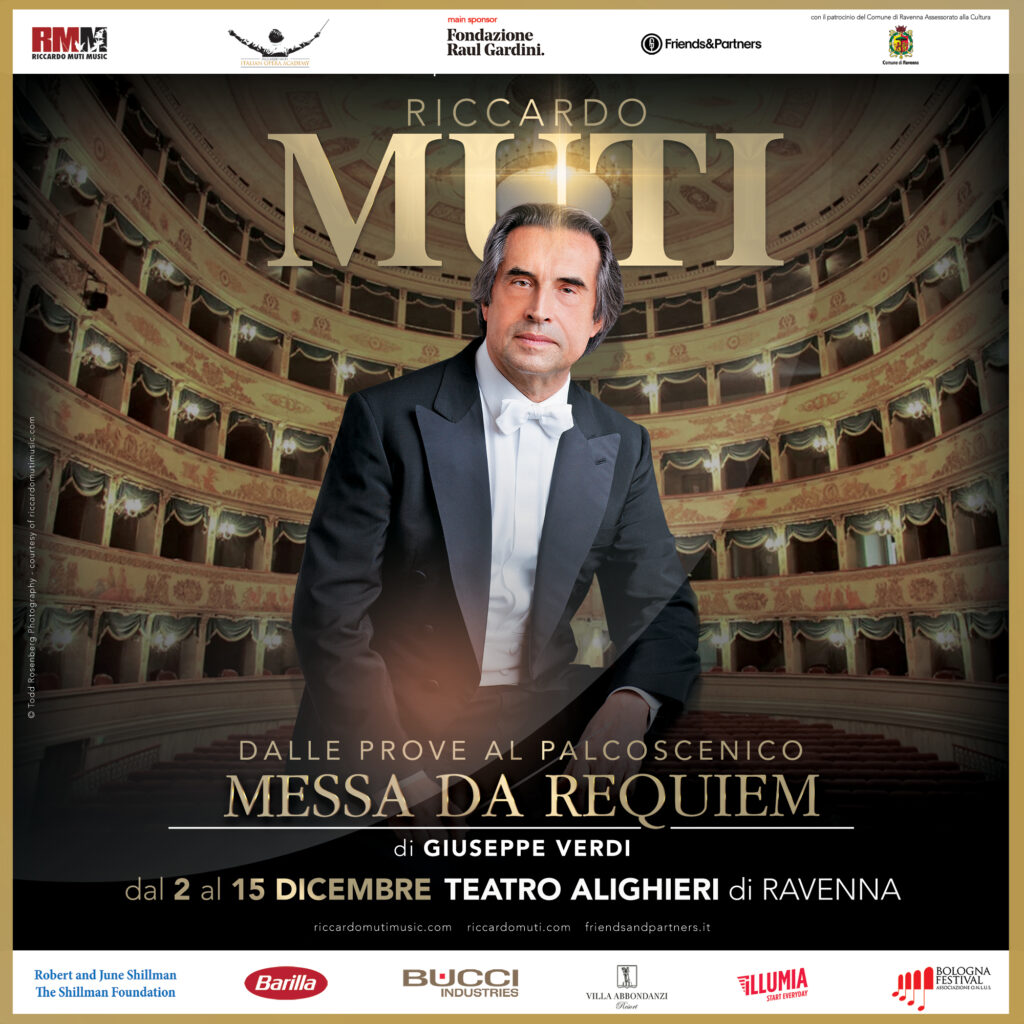 RICCARDO MUTI MESSA DA REQUIEM by GIUSEPPE VERDI DECEMBER 2nd to 15th at the Teatro Alighieri in Ravenna   From the preparatory stages and rehearsals to the final performance... a unique opportunity to immerse yourself in the concert always accompanied by Maestro Riccardo Muti Tickets available in advance from today at 4 p.m. From December [...]

March 12, 2022 RAVENNA YOUNG CONDUCTORS OF THE RICCARDO MUTI ITALIAN OPERA ACADEMY ON THE PODIUM OF ORCHESTRA GIOVANILE LUIGI CHERUBINI From 31 October to 6 November 2022, the Autumn Trilogy celebrates its 10th anniversary and in this occasion the protagonists are Mozart and Da Ponte’s masterpieces: The Marriage of Figaro, Don Giovanni, and Così [...]